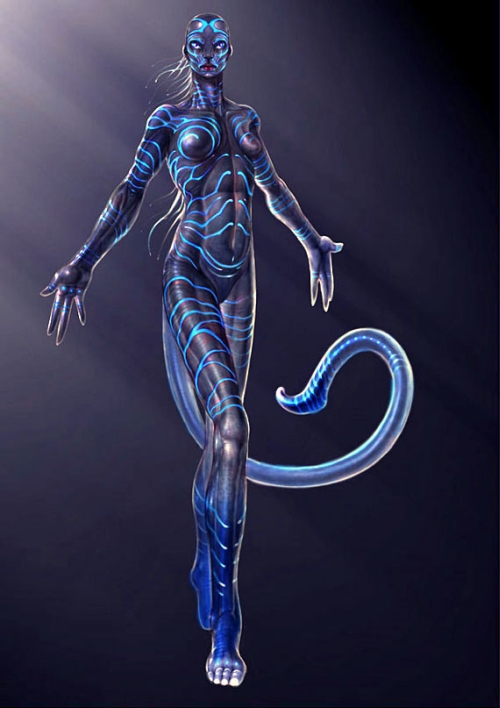 Some smart bastard over at Time volunteered to write a piece about the advent of 3-D movies, and this landed him an invite to see a few scenes from James Cameron’s upcoming super project, the $300M Avatar. And what’d he think?

Avatar is filmed in the old “Spruce Goose” hangar, the 16,000-sq.-ft. space where Howard Hughes built his wooden airplane. The film is set in the future, and most of the action takes place on a mythical planet, Pandora. The actors work in an empty studio; Pandora’s lush jungle-aquatic environment is computer-generated in New Zealand by Jackson’s special-effects company, Weta Digital, and added later.I couldn’t tell what was real and what was animated–even knowing that the 9-ft.-tall blue, dappled dude couldn’t possibly be real. The scenes were so startling and absorbing that the following morning, I had the peculiar sensation of wanting to return there, as if Pandora were real.Cameron wasn’t surprised. One theory, he says, is that 3-D viewing “is so close to a real experience that it actually triggers memory creation in a way that 2-D viewing doesn’t.” His own theory is that stereoscopic viewing uses more neurons. That’s possible. After watching all that 3-D, I was a bit wiped out. I was also totally entertained.

Wow, James Cameron’s new movie is so insane, it’s literally going to rewire the way your brain works. Now that Watchmen has come and gone, Avatar is the next movie I’m piss-in-my-pants excited about. Too bad I have to wait until December. Hopefully, Wolverine, Star Trek, Terminator, G.I. Joe and Transformers can all combine forces and tide me over until then.

This whole Time article is great, I highly suggest you read the whole thing here.