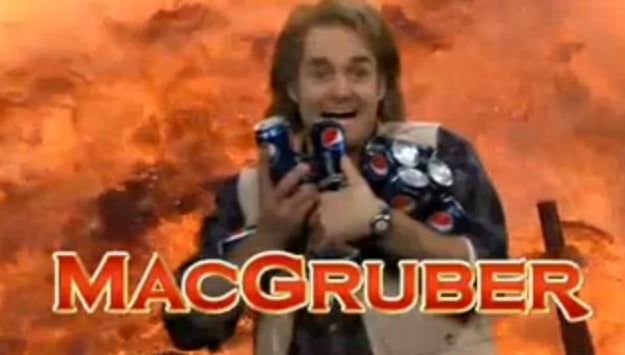 I mean, I would think that making a movie based on an SNL skit is a better idea than basing one off of View-Masters or Candyland, but I’m not so sure about MacGruber.

Yes, you remember the MacGruber skit. It’s Will Forte as a MacGyver clone with an affinity for selling out to Pepsi. And now, it’s just dawned on me that this wasn’t an SNL skit was it? It was a Pepsi commercial during the Superbowl! Did this bit ever show up on the show again after that? I stopped watching SNL about a decade ago.

And commercial or not, this skit wasn’t even funny for the entire two minutes it aired, so how the hell can they stretch the gag into an hour and a half? Well, the answer is Val Kilmer apparently. He’s signed on to play to film’s villain, who is plotting to do something or another with a nuclear warhead. Also inexplicably showing up is Ryan Phillipe as the straight man solider to MacGruber’s absurdity.

Is this whole thing going to be a joke about Pepsi again? I don’t understand what’s driving this project.