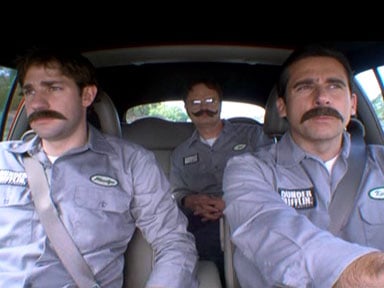 Before I start what is probably going to sound like an anti-Office tirade, let me be clear. The Office is one of my favorite shows ever, I love it dearly and will continue to do so even if they kill off all the characters except Creed and Kelly. But it’s because I love it so much that I feel I must comment on when I see it’s losing its edge.

Seasons one, two and most of three were models of comedic writing, timing and acting, but now as we stretch into season five, I fear that wit and subtlety may be going by the wayside to make for more ridiculous and over the top plotlines with little regard for the show’s original dry humor roots.

Here are ten prime examples which I consider mistakes the show will learn from:

This was an incredibly divisive episode. Some loved it, and some thought it was one of the worst ones ever. I fall into the latter group as you can see. I always though Michael and Jan’s relationship was a bit too much outside the realm of reality, but I tolerated it for as long as I had to. But to have them literally screaming and breaking electronic devices? Unfortunate. Just let awkwardness play out without resorting to actual violence. For example, the charades part of that episode was great, the dinner? Not so much.

Also, there is one joke in that episode that to me says a lot about how the show has changed. Michael’s giving a tour of the house and when they enter the bedroom there’s a camera set up on a tripod pointing at the bed. Now subtlety says that’s a nice subtle little visual gag and should have been left at that, but “new” Office philosophy dictates that Jan go “Oh my look at that! I told you we really should clean up better! Ha ha!” beating us over the head with it just in case we couldn’t get it the first time. Well I suppose we are watching NBC.

I’ll tell you now that this is the earliest moment on this list, as I thought the first two seasons didn’t have any terribly unbalanced sequences in them. But the season three premiere brought a dark omen of things to come.

8 ) Michael Forages in the Woods 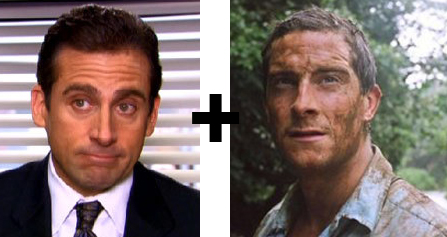 Sometimes the entire episode is based around one ridiculous premise, and Survivorman is one such example. Ryan snubbing Michael to go on a camping trip was fine, but to react by going out into the woods all day to prove you’re a real man? Come on. All that resulted was a cut up suit and a not very funny episode.

7) Michael Almost Jumps Off a Building

One minute Michael is giving safety instructions, the next he’s up on a rooftop attempting to jump onto a moonbounce to illustrate….what, exactly? Michael behaves like either A) a  delusional child or B) a psychopath and it’s hard to believe anyone would actually do anything this chronically stupid. Either that or it was just about the darkest moment The Office has ever had, if Michael was seriously contemplating jumping because he wasn’t getting any respect from anyone. 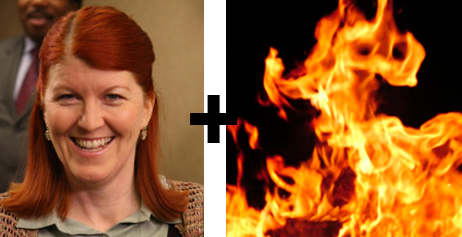 The Office has always had great Christmas episodes, but Moroccan Christmas was not one of them as Meredith gets really drunk and somehow catches on fire. I’m alright with her flashing her boobs after a long night of partying, but really? Setting herself on fire? Between that and the bat, Meredith has pretty bad hair luck. Almost as bad was when Michael was chasing her around the rehab parking lot. I was half surprised they weren’t playing Benny Hill music while it was happening.

This was a good episode for many reasons, the best being Jim and Karen’s awkward reunion, but the reason they were there? Dressed up as mustachioed warehouse workers to steal their rival branch’s printer? Sigh. It seemed like a plotline out of a different show entirely, and thankfully most of Michael’s other covert schemes (intel gathering on Prince Family Paper), haven’t been quite as absurd.

I actually thought it was amusing that Michael fell in love with a girl from the office supplies catalog, but the episode went a step too far when upon learning of her death (which was bad enough) he and Dwight went to her actual grave.  Though to be fair, I really did like the song they sang.

I mean come on, even the episode is called “Frame Toby.” Sure, they weren’t actual drugs (basil, specifically), but the point is, Michael thought they were real and could have actually gotten his coworker sent to jail. That goes beyond mean spirited and into being an actual felony and unfunny sociopathic behavior. Drug Testing was a good example of how to handle illegal behavior in The Office, this episode, three seasons later, was way, way too over the top.

2) Dwight Sets the Office on Fire 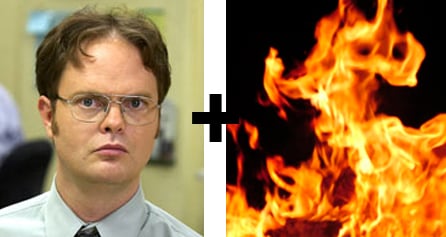 Dwight has flirted between likeably odd and dangerously psychotic in the past, but this ordeal just pushed him over the edge. Setting a fire then causing a mass panic in the office to prove a point about safety instructions? Get real. To see the entire office running around, breaking glass and falling through ceilings may have been a gut laugh, but it’s really a sign of how much the show is relying more on slapstick than clever writing these days.

1) Michael Drives His Car into a Lake

This was the moment for me that transformed Michael from clueless sap to a full blown moronic cartoon character. I really liked the whole Michael vs. technology aspect of this episode, but having him drive into a lake because his GPS told him to is simply not believeable. He can see he’s going in the water, yet keeps accelerating to what, prove a point? The whole sequence doesn’t even make logical sense. Since early season four Michael has had many more brushes with the absurd, as you can see, and to me they’ve always been the low points of each episode.

I truly hope that The Office can remember that it was subtlety and wit that has made the show great for so many seasons, and I’ll probably make a more upbeat list about the show’s best moments shortly. Physical comedy is a nice gag every so often, but the fundamental focus has to be on the writing, which I feel has been slowly slipping away since season three. All this being said, a bad episode of The Office is better than 90% of other TV shows on right now, and I will watch it until one of us dies.

Where the hell did Ryan go?