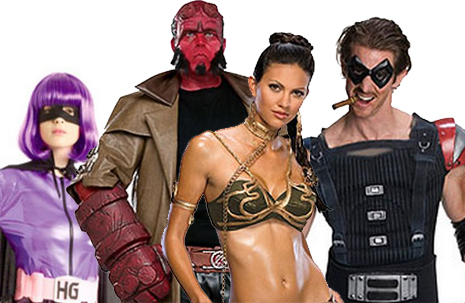 All last week a lot of you posted your best sci-fi jokes to a Facebook thread, and I’ve sifted through them all to find a pair of winners who get $100 worth of costumes and accessories from HalloweenCostumes.com.

There were some good, some bad, and some nonsensical, but I picked these two out as my favorite. One is actually a joke I’ve been telling for about ten years (the first one) and the other I laughed despite it’s innate simplicity.

So check out the two winning entries from Clark Rumble and Stephen Duffin below, and if that’s you, check your inbox for a FB message from me about getting your prize. And actually Clark, now that I’m looking. Your privacy settings are actually such that I can’t send you a message, so hopefully you either read this or accept my friend request which I felt awkward extending.

Thanks to all for entering, and see you next contest!

A guy sits at a bar in a skyscraper restaurant high above the city. He slams a shot of tequila, goes over to the window and jumps out.

The guy sitting next to him can’t believe what he just saw. He’s more surprised when, 10 minutes later, the same guy walks back into the bar and sits down next to him.

The astonished onlooker asks, “How did you do that? I just saw you jump out the window, and we’re hundreds of feet above the ground!”

The jumper responds by slurring, “Well, I don’t get it either. I slam a shot of tequila, and when I jump out the window, the tequila makes me slow down right before I hit the ground. Watch.” He takes a shot, goes to the window and jumps out.

The other guy runs to the window and watches as the guy falls to just above the sidewalk, slows down and lands softly on his feet. A few minutes later, the jumper walks back into the bar.

The other guy has to try it, too, so he orders a shot of tequila. He slams it and jumps out the window. As he reaches the bottom, he doesn’t slow down at all. SPLAT!

The first guy orders another shot of tequila. The bartender shakes his head. “You’re really an a**hole when you’re drunk, Superman.”

How does Darth Vader know what you got for Christmas?

He felt your presents.