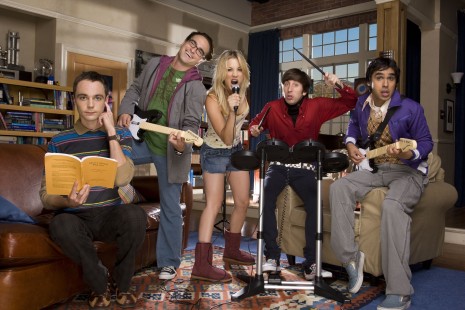 I posed this question on our Facebook Page and I wanted to get more opinions.  Given that some shows I enjoyed thoroughly in the past aren’t doing it for me anymore it’s time to explore some shows that I need to see.  By the way those shows that are turning me off are The Office and 30 Rock.  I guess there’s just so much you can take of the same kind of humor episode after episode.

And just a side note.  I do happen to agree with Paul that Community isn’t that bad.  So while I continue combing television I just want to pose this debate/topic to our readers.  Honestly I haven’t seen more than 5 minutes of The Big Bang Theory so I can’t really give an objective opinion.  All I know is that historically I’m not a big fan of Johnny Galecki (ever since Rosanne he just annoyed me).

The only role I liked Jim Parsons in was Garden State where he played a weirdo named Tim who spoke Klingon and was banging Peter Sarsgaard’s mom.   And to be honest his face kind of freaked me out at the Emmy awards.  What the hell was going on there?  Plus the guy is stick thin and looks anorexic.  I don’t know.  He just scares me a little.

From the 5 or so minutes I did see?  They weren’t pleasant.   I felt that Parsons (who I assume carries the show) overacted and each line was so intense or something.  Tough to explain.   Kind of like how Jenna speaks on 30 Rock.    The main girl isn’t that hot so it bothered me.  Also, I get having a “geeky” show and all but I simply didn’t understand any of it.  Granted 5 minutes is not a lot but it’s definitely enough to piss me off…..a la Two and a Half Men.  You do NOT need more than five minutes to realize that show sucks.

So if any of you do like The Big Bang Theory, please tell me why and convince me to see it.  If you don’t like it, then blast it as well.  Your comments are appreciated…..