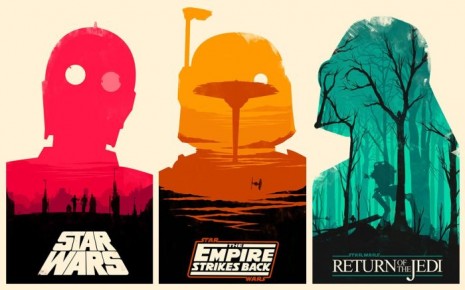 I’m not sure who crafted this simplistic, incredibly appealing poster series for the old (good) Star Wars trilogy, but someone find them so I can shake their hand. I know Mondo has been making artsy Star Wars posters lately, so maybe it’s them, but whatever the case, in a job where I see a million Star Wars references and pieces of art and tribute a day, this really stands out.

If this is available as a full poster set, I’d love to pick it up. The coolest part by far is how Cloud City is used as Fett’s visor. The trees wrapping themselves into Vader’s helmet is well done as well, and are those meant to be the twin suns as Threepio’s eyes there? Masterful.

Many, I really miss pre-Phantom Menace Star Wars. The old trilogy, games like Rebel Assault and Shadows of the Empire. Those were the days.

Outside my window, the world is dying. Heaving her crimson guts against an ash grey sky. I can see the roving bands of wanderers and nomads, scavenging for food and any other scrap they can…

Yeah, how about that for an incredibly tall image? In any case, this is a fan made deleted scene from The Dark Knight Rises which imagines what it might have looked like if Ledger’s Joker…

Update: Watch the videos here that aren’t stolen YouTube rips. It’s not as brutal as the Red Letter Media reviews, but it’s worthwhile nonetheless. Some crazy person sat down and cut together an absolutely fascinating…

While 2015 and 2016 are going to be packed full of hugely anticipated summer blockbusters, I don’t think the same is quite true for 2014. Somehow, some way, Godzilla actually looks like the most promising…

OK here’s the deal with this recommendation.   It’s easily one of the worst movies of all time.  However,  I know there’s a contingent out there who once thought that Jim Carrey was the funniest guy…

by Lyle Smith Hey folks, time for some more This Week in Movie Trailers! It has been a relatively calm week for movie previews, but let’s see what’s been released anyway! Oh, first, did anyone…