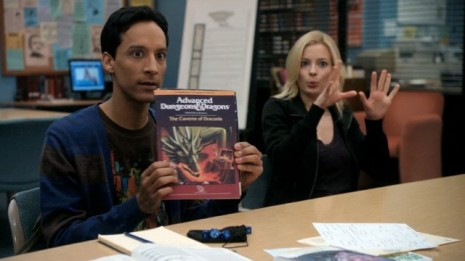 So normally the kind of stuff I choose to share with you is interesting pictures or videos or some of my reviews or columns and the like, but today, the focus is on straight up information, which highlights what’s wrong with network TV these days.

I know there are a lot of Community fans out there, myself included as you guys encouraged me to get into the show. Unquestionably one of the best episodes of the series so far was “Advanced Dungeons & Dragons” where the gang tried to help out a depressed classmate by organizing a game of D&D. Pierce promptly took over the game as the lead villain, and even though it was just eight people sitting around a table, it was one of the best comedy episodes (with a pretty heavy dramatic punch) that I’ve ever seen.

But as it turns out, NBC never wanted this episode to air. They were vehemently opposed to the entire concept of a D&D episode because they thought it wouldn’t appeal to the demos they were trying to target.

The Onion AV Club has an ongoing interview series with creator Dan Harmon where he talks about every episode in the season, and reading what he has to say about Advanced Dungeons and Dragons makes me weep for the state of network television, and it quite literally made him cry as well.

I’ve pulled some highlights below you should definitely read:

“They [the studio and the network] were so upset about the crime of this episode having been written. The note session as a whole was preceded by a 45-minute period of them walking around the lot whispering to each other. They told me they would come up to my office and meet me privately. When they came up, I had the director and all of the writers in the office with me, because I was terrified. They sat down, and they said, ‘Look, where do we start?’ I couldn’t believe this was happening. I was like, ‘This is opposite of how you should feel right now. This is a great episode. We’re going to get a 1.7 no matter what. We will build our ratings in other ways. The episode is not about credit cards; it’s not about Hilary Duff. It’s going to get the same numbers. There is a cultural build to a hit show. We have to prove to people that we’re capable of good things so they can trust us, so that we can have a relationship. One day we will either be a highly rated show or we’ll be canceled. It will not have to do with this moment. This episode is good, the story is good, these characters are good. Anyone who doesn’t tune in because the commercial says they’re playing Dungeons & Dragons, it’s not my fault. It’s not on me.”

“It was such a depressing note session, because they didn’t even have any notes on the story. They just didn’t want it to exist. I took a photograph of my eyes driving home that day at 3 p.m. because I was leaving work early. I looked in my rear view mirror, and I was crying. More than crying, I was red-eyes, tears streaming, weeping. And I was weeping out of self-pity and frustration, like a child weeps when he doesn’t understand his parents’ rules. ‘Why can’t I have ice cream when I ate my liver?’ I took a photo of it, so I could show it to them between seasons, because as I told my girlfriend when I got home, ‘I think I’m going to have to quit my own show, because I can’t operate under these circumstances. I can’t be this proud of something that the people paying me to do it are this ashamed of. It will never work. We’ll never achieve anything. It’ll never connect.'”

Read the entire interview over at the AV Club.