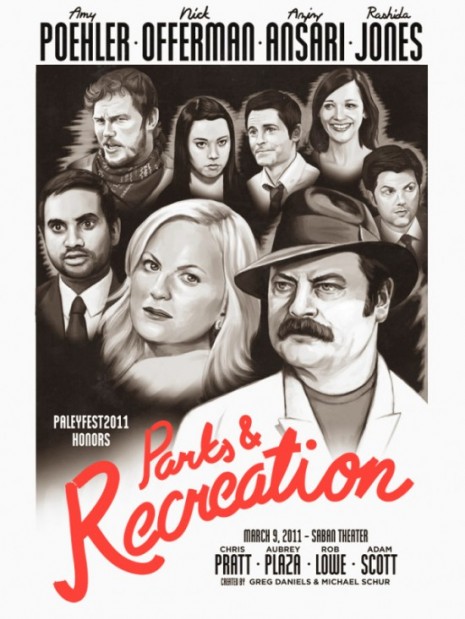 If you’re not watching Parks and Recreation, you can go to hell, because it’s one of the best shows on TV and if it gets cancelled I’m blaming YOU for watching Two and a Half Men instead.

But fans of the show should appreciate this fan-made poster that renders the cast in the style of Casablanca. But it’s not just any fan, it’s Mike Mitchell, who you’ll probably remember did that awesome “I’m With Coco” poster back when that whole NBC drama was going down.

The Walking Dead continues to be as watchable as watchable gets, and honestly I had a brief vision this week of flashing forward into the future and seeing 20% of the current cast still shambling…

httpv://www.youtube.com/watch?v=tp19qiash2U&feature=player_embedded Alright, this is the best video I’ve seen all week without a doubt. It’s a surpremely well edited and acted skit showing Jack Bauer threatening to torture one Jolly St. Nick. Why? The beard!…

Do you have long hair, swagger, a crossbow, and generally resemble a Boondock Saint? Well, then you might want to consider dressing up as Daryl Dixon for either cosplay purposes or Halloween. And the essential…

This kid has the biggest pair of Lost fans in the world as parents, and as such, he gets to be raised as a Dharma recruit. His room is a collection of all things Lost,…

I wasn’t allowed to read Goosebumps when I was a kid because my parents thought they would give me nightmares. Well, I snuck away and read them anyway, and damnit, they were right. But they…

I didn’t wade into the debate when Remy wrote his post about why this season of American Horror Story was bad, but I wholeheartedly agree with him. So much so, I didn’t bother watching the…