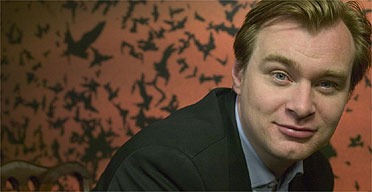 According to Variety, Christopher Nolan’s next movie isn’t going to be a Batman sequel:

In a whopping seven-figure buy, Warner Bros. has nabbed “Inception,” a script written by Christopher Nolan as his next directing vehicle.

Deal allows WB to keep the director of its 2008 top-grosser “The Dark Knight” in the studio fold and gives WB a big film for summer 2010.

Nolan will begin production this summer on the project that Warner describes as a contemporary sci-fi actioner set within the architecture of the mind.

Good. Memento and The Prestige are both awesome, so a new, non-Batman movie from him is just fine with me. The other good news is that the [fill in actor’s name here] as [fill in Batman villain’s name here] rumors will finally die down for the foreseeable future. Besides, it’s a smart move for Nolan; the pressure of making another Batman movie that would be as good as The Dark Knight – or Batman Begins, for that matter – must be unbearable.