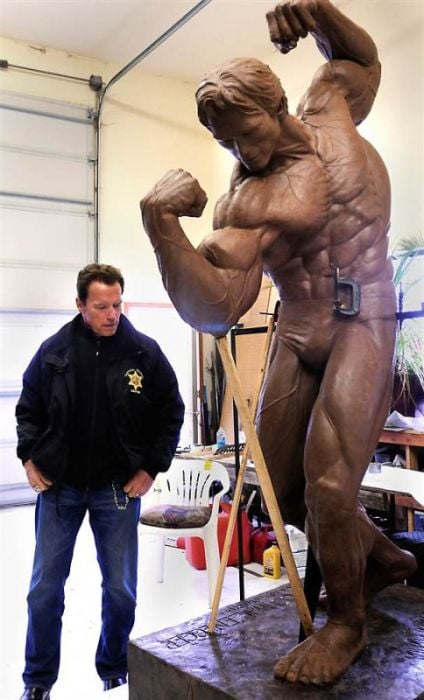 I’m not sure who is crafting this Arnold statue and why, but I really hope it’s the ex-Governator himself, and he’s getting this to put in front of his house. What? We need more Hollywood stars with crazy egos obviously.

He really has lost a lost of mass in general now that he’s an old politician. I heard he’s trying to get back into acting, but he’s going to have to hit the gym first if he wants to reclaim his former action-hero glory. Don’t tell me he’s going to start doing dramas and being the intimidating dad in romantic comedies.

(click to enlarge) It seems that not a week goes by where I don’t have to feature some sort of Disney princess redesign, but I will say this is one of the cooler ones. Nothing…

It was pretty inevitable that Jean Claude Van Damme would at some point have been involved in this movie.

Today we have a really cool collection of pop culture art from Timothy Anderson. He’s taken a few classic sci-fi films, Alien, The Matrix and Blade Runner, and redesigned them in the style of pulp…

Alright so this is technically called “Fear and Loathing in Monsters Inc.” but I like my title better. The artist is Andy Timm, and he’s clearly amazing. Check out his other work here. I’d really…

This video by solyentbrak1 on YouTube deserves some praise for creating a nicely edited fan made trailer for the upcoming Batman vs. Superman film. It features Henry Cavill, Amy Adams, Ben Affleck, Bryan Cranston, and…