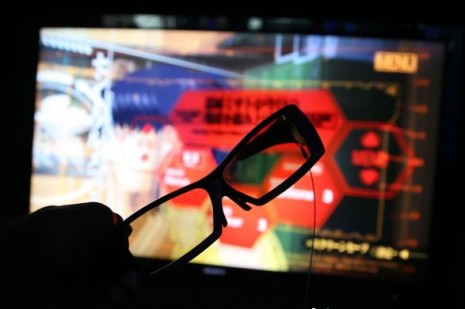 Something strange happened to me this weekend, and I just thought I’d share so see what you make of it. Twas the day after Christmas, and I was at the mall returning things to get different things as is a yearly tradition. While there, I found myself outside the Sony store. I thought I’d pop in and see if they sold batteries for my two year old, fast-dying VAIO, but after being told I might as well take it out to pasture and shoot it, I turned to other matters, namely the TV section.

I was watching Toy Story 3 on Blu-ray 1080p, and DAMN did that look good. Far clearer than I ever saw it in theaters, and it almost makes me think the format is worth $35 a DVD. Just kidding, but it did look nice. But next to that, there was a 3D TV, which I’m told 80% of households will own by 2014 or something. I’ve never actually used one before, so I thought I’d try. I put on a pair of Sony’s hundred dollar 3D shutter glasses, which in theory, should make 3D look 100x better than the shitty $1 glasses we normally use at the theater. I flipped about three different switches before they started working, as they actually have to be powered somehow for the 3D to work, technology I don’t quite understand.

I watched Johnny Depp narrate a movie about ocean fish for about 3 minutes. Glowing jellyfish hovered around in 3D, but the kind of 3D where things have depth inwards, rather than things popping outwards at you, like the 3DS. But it wasn’t shaky or very blurry, so I thought it alright. Not $5K for a TV, must wear glasses all the time alright, but alright nonetheless.

But then when I left the store, and marched onward toward my next location, something strange happened. I began to feel very dizzy, disoriented and almost nauseous. So much so, I legitimately had to sit down on a nearby bench for fear of falling over. I felt drunk without the fun buzz part, just the spins. Standing I could barely keep my balance, so on that bench I sat until the feeling passed about five minutes later.

What the hell happened to me? I’ve been watching 3D movies for years, and though I’m not a big fan of the format as it makes the picture darker, blurrier and more expensive most of the time, I’ve never, ever experienced anything like this. I have to imagine it’s something to do with battery powered shutter glasses, as they must have messed up something with my internal gyroscope and caused me to wobble about. Is this a common problem? I can’t imagine so, or else these things would be off the market. It’s clued me in that I’m never getting one, at least not until these damn glasses go away once and for all.

I have no vendetta against Sony, and am merely reporting exactly what happened. What do you make of what happened to me?