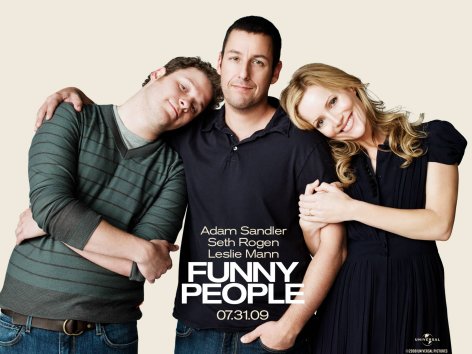 Something tells me that this review is going to be the most spot on about this film.  Don’t get me wrong, I give Apatow all the credit in the world for the films he’s made.  Notably Knocked Up and 40 Year Old Virgin.  You have to admit those are pretty funny.

But if there’s one complaint I have about Apatow’s style is that it’s a little cheesy.  Like rather than go all out with something completely slapstick and disgusting, there has to be a sense of “sensitivity” involved.  It’s similar to the kind of crap you see in love stories.   Even uplifting to some respect.  While humor is still there, it’s kind of heartfelt.  And honestly I don’t really need that in a comedy.  Just go Todd Phillips a-la Old School and don’t mess around.

By the way, I’m referring to the films Apatow’s directed, not written or produced.  I mean the guy produced Superbad so I’m not off his side just yet.  But let’s be realistic.  This film is definitely an attempt to add drama to his resume.  I haven’t even seen the damned thing yet but you can just tell from the previews.

And the pairing of Sandler with this new generation?  I don’t like it.  I don’t like it at all.  When’s the last time Sandler was funny?  Honestly.  It was in Big Daddy.   This is like watching Jimmy Paige rock out with Puff Daddy in that crappy version of Kashmir years back.   Kind of vomit inducing actually.

100 bucks says Eric Bana is by far the best thing in this movie.