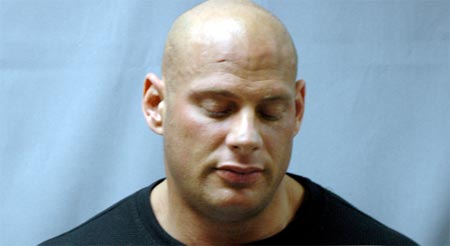 You can’t make this stuff up:

An actor who played a steroids dealer in the movie “The Wrestler” was arrested on drug charges after leading police on a high-speed chase in Eastchester on Thursday.

Scott Siegel was under surveillance by DEA agents who saw him picking up a package in New Rochelle on Wednesday before leading them on a car chase in his SUV, investigators said.

Siegel struggled with DEA agents before they were able to take him into custody at the intersection of Highland Avenue and Main Street, authorities said. Siegel is charged with attempting to distribute steroids and assaulting a federal agent.

Thursday’s arrest was not Siegel’s first brush with the law. He was arrested in 1999 for distributing steroids, ecstasy and an animal tranquilizer that can be used for hallucinations.

Siegel’s character sells the main character Randy “The Ram”, played by Mickey Rourke, steroids and painkillers in a locker room in “The Wrestler”.

When they were casting the movie, did they ask the real wrestlers who appeared in it, “Hey, where do you get your steroids?” and then did they say “Oh those, from Scott! And yeah he’d totally be up for the role.” This is like a pre-trial O.J. Simpson starring in a movie about a rich football player who kills his wife. And I also love how this guy is also distributing the drug that was in the dart that Will Ferrel got shot with in Old School.