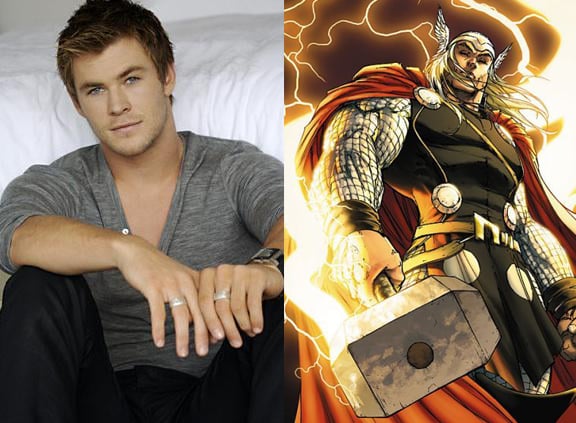 Hooray, woo-hoo, look at that. They cast Chris Hemsworth (also known as Captain Kirk’s dad) as Thor in the new movie. He’s blonde-ish, and sort of big I guess. I could see him holding a hammer.

Has anyone really ever stopped  and thought about this Thor movie project? Like really, sat down and thought about what it’s going to be like? This isn’t a superhero movie, it’s a Norse mythology movie, and it’s going to be weird as all hell. Like yes, a guy with a winged helmet, chain mail, flowing blonde hair and a hammer is cool in a comic book, but when it’s actually a real person, I can’t see it not looking absolutely ridiculous.

And then there’s going to be all the weirdass gods that no one has ever heard of except Norse Studies majors, and the movie will be drowning in copious amounts of CGI as most of it takes place in Valhalla.

I just don’t really know how this will work, as it’s not going to be like any other superhero movie we’ve seen. And how exactly do you slide in Thor with Iron Man, Nick Fury and the Hulk when he’s a god and they’re all regular joes? I know it’s in the comic, but that doesn’t mean it makes any more sense. I can see it now:

Tony Stark: Yeah, me too buddy, and I’ve got more money than the devil too.

Tony Stark: I’m a bored billionaire who built a robotic suit that cost more than Canada.

Hulk: I’m an idiotic scientist who overdosed on gamma rays.

Thor: What the…? I thought I was joining an elite group of all-powerful heroes here! Where’s Superman, Martian Manhunter, Green Lantern and Wonder Woman? They’re god-like and all-powerful like me!

Tony Stark: That’s the Justice League boss, you’re in the Marvel universe, where our heroes are regular joes with extraordinary abilities. Have you met my friend Spidey?