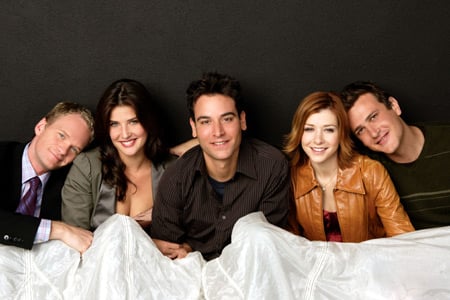 Alright dammit.  It’s time to talk about How I Met Your Mother already.   I don’t get it.  I really don’t.  Sure I understand that Neil Patrick Harris’s character is pretty funny.  He’s a super male egotistical guy that gets laid a lot and wears a suit.  But doesn’t that kind of get old for a while?  And believe me I’ve given it a shot.  I’ve seen the show over 10 times because my wife swears by it.

I feel like it’s a pseudo Friends that’s not nearly as good (and I didn’t even like Friends).  And what the hell?  Are there any groups of five people that are this close in New York City or any city for that matter? Not to mention a married couple included in this group?  Who the hell hangs out at the same bar every single day with the exception of alcoholics?

And come on.  The characters?  They’re not good!  Alyson Hannigan is just annoying, period.  And every time they try to make her sexy I throw up a little in my mouth.   Jason Segel is decent but he’s WAY better in movies when he can curse and be lewd.  This show limits him way too much.   Cobie Smulders is not that hot.  Can people please admit to this?  And her tough character?  Give it a rest.   Josh Radnor (Ted) is eh.  I mean he’s kind of cute I guess but still pathetic and annoying.   And of course  Barney (Neil Patrick Harris).

I just feel like the show gets old very very quickly and when you look at past sitcoms and the likes of Seinfeld, Cheers, Family Ties, Cosby Show, the list goes on, How I Met Your Mother is far from adequate.

Is it entertaining?  Sure.  Is it legitimately good?  Hardly.  Discuss….

Let me just start off by saying that I own an iPhone, iPad, iTouch, and an iPod mini.   So no, this isn’t an Apple bashing article.   However, there is something to be said about assumptions…

We’ll be back tomorrow. Hope you are enjoying the long weekend and remembering why it exists.

Friends Have you ever wondered what it would be like to be on set of a show or a movie?  Would you analyze that set from an architectural point of view? Neither would I.  I’d…

As I’ve spoken about before on this site, as has Paul, I don’t really understand the legions of WoW fans out there.  How there can be nearly 13 million subscribers to this sub culture is…

Chloe isn’t part of the Sequential Art universe….. but do you really think an inter-dimensional barrier is going to stop her from mischief making? (Via)

I’m not quite sure how to get away with explaining this stuff without it being kind of racist?  I mean is it even racist?  It’s kind of like those “only in Japan” type sites or…