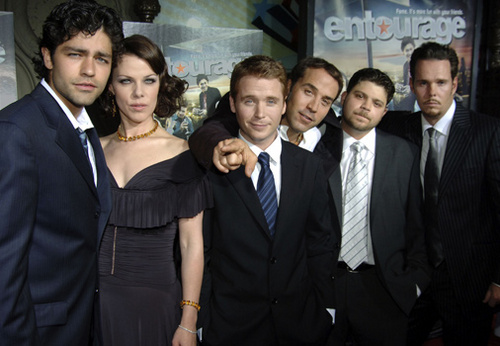 Recently, Mark Wahlberg dropped the bomb that there is going to be an Entourage movie at some point when the show finally takes a bow, in the tradition of Sex in the City. He offered no other details than that, causing me to speculate on just what an Entourage movie would consist of. Don’t get me wrong, I thought the show was the shit about four years ago, but since then, they’ve been averaging about 1.5 good episodes a season, as they’re simply just running out of ideas.

The show can barely keep a twenty minute episode going without large chunks of filler sprinkled into it, how the hell are they going to come up with a feature length film? Also, I can’t even begin to imagine just how many cameos the movie will try to cram in. With an average of 2.5 an episode, they should have about 87 in the film version. Don’t question my math.

All this being said, I’ll pay a $7.50 student price to go see this thing in theaters. I think most shows deserve a fitting end, and that’s usually something that can’t be crammed into a double-sized episode. It worked for Firefly, I hear it worked for Sex in the City, and hopefully it will work for Arrested Development. I’ll give Entourage a shot too I guess.