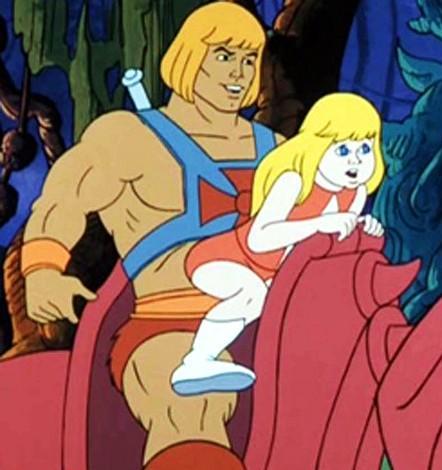 You know, I’m all for Facebook fads sometimes. For example, I love doppleganger month, where everyone changes their profile picture to a celebrity that looks somewhat like them. I didn’t participate last year, but now I’m told I need to be Andrew Garfield (from The Social Network) this time around. Screw you, I’m James Franco.

But with that movement, we’re not doing it to raise awareness for multiple personality disorder. But should we be?

That’s what someone behind this current Facebook outbreak thought, that by changing your picture to a cartoon from your childhood, that we can “raise awareness” about child abuse. See also the “I want it on the floor” or “my bra is green” status trend that was supposed to cryptically raise awareness for breast cancer. Sadly, that was a pictureless trend was not “post your boobs as your profile picture,” though many do that anyway.

There are two sides to this coin here. When I first started seeing people change their pictures I thought, “alright, let’s get a picture of Jonny Quest up here for a week or two.” But then once I realized what it was “supporting”? I was embarassed to have my friends thinking I was making such a shallow gesture.

It’s called “slacktivism,” and it’s the 2010 equivalent of putting a ribbon sticker on your car. You’re “raising awareness” without doing much of anything at all. Rather than give $20 to a charity like ChildHelp, you’re just changing your profile picture to a Ninja Turtle.

But surprise, I’ve got a twist ending for you. It works. Keep reading to see why.

“Waltz said ChildHelp started to notice the cartoon profile picture trend on Facebook last week. The organization put a message up on its Facebook page to draw attention to the initiative and, like many other children’s charities, support the online campaign.

“The response has been phenomenal,” Stutz told TechNewsDaily. “Our Website usually gets about 2,500 unique visitors a day, but we got 10,000 on Saturday and another 10,000 on Sunday. It usually takes us at least two weeks to reach those numbers. It’s been a wonderful surprise…At first I wasn’t sure if the donations were even real – I thought it could have been spam,” Issa said. “We have a $1,200 increase in small donations and I couldn’t figure out why.

Oh goddamit. You have to take the wind out of my ranting sails don’t you? As it turns out, for every 1,000 people who participate in this trend, there are a few who actually think about abused children, hunt down a charity and give. It’s not many, but it’s something, and it’s more than it would have been had this whole seemingly stupid movement not existed at all.

So guess what Jr. High Facebookers who probably started this. You did something. Not much, but it was something, and I guess I can’t hate on you too much for that.

Now, to find the perfect doppleganger…