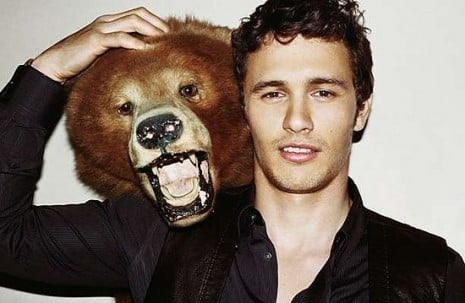 Yes, the duo are technically comedic actors, but they are also the leads in many movies these days, something most past recent hosts (other than Hugh Jackman) can’t claim. Hathaway should have smooth sailing ahoy, but Franco? It’s a different story with him. Why?

He’s going to be (has to be) nominated for his powerful performance in Danny Boyle’s 127 Hours, where he plays a real-life hiker who cuts his own arm off after he’s trapped after an accident. But now, he’s hosting the awards?

I honestly don’t think a host has ever been nominated for an Oscar nor won one, at least not in the last forty or fifty years, and I can’t tell if this helps or hurts Franco’s chances. On one hand, the Academy clearly likes him to some degree as they want him on hosting duties, and he’ll be in the forefront of everyone’s mind all night, on the other, this is his first real “superstar” role where he’s been taken seriously for an award like this, and he’s going to be doing skits and jokes throughout the evening?

It just seems like a weird situation to me, and I can’t help but think it might have been better for him to decline. What do you think?