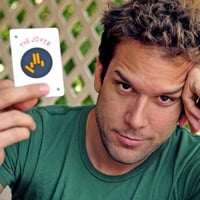 I will use an old Jewish woman coffee talk gossip phrase to describe this situation:  “Could ya die?”

The comedian was recently speaking with MTV News and the idea of him being a part of a “Dark Knight” sequel was brought up. Here’s his response:

“I love the new Dark Knight series and ‘Batman Begins,'” Cook told MTV News when asked if there were any comic book movie characters he has his eye on. “If they brought back The Riddler—a new Riddler the way they did with The Joker—that would be bad-ass. I would do that.”

1. Wrong
2. Horribly
3. Like a moronic comedian would
4. With Zero talent
5. WAY too much effort thus making it terrible

If the Riddler does in fact get re introduced how about we put someone qualified into the role?  Any thoughts?  Personally I thought Jim Carrey did a nice job.  In today’s world?