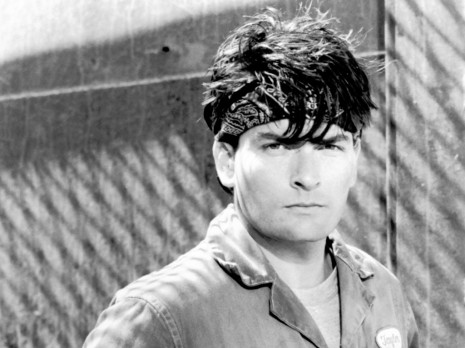 It’s not normally like us to jump on the bandwagon and make fun of celebrities who are on the front pages every single day for a week straight.  However, this entire Charlie Sheen is one of those once in a lifetime things that the press is really stretching to its outer limits.

And rather than blast the guy any further I thought we could focus on some of the lighter things in the life of Sheen.   Let us reflect on some quotes he’s made over the years.

*And don’t forget to check out the video at the end of this.  It’s amazing…..

“I knew if I got loaded I was going away for a while. People would say, Oh, you’re just sober because you’re on probation.”

“I saw 28 Days. I don’t remember rehab being like a day camp or being that funny. Rehab is a dumping ground. It’s a big landfill.”

“I was with one at a time with the other four watching. It was a little uncomfortable, actually. I wouldn’t recommend five at once. There’s just not enough guy to go around.”

“Slash sat me down at his house and said, You’ve got to clean up your act. You know you’ve gone too far when Slash is saying, Look, you’ve got to get into rehab.”

“Sure, I did a lot of things in excess. But if you look at the core, the foundation of what I pursued, what red-blooded young American male in my position wouldn’t”

“When friends asked me, Can we help? I’d say, Not unless you can alter time, speed up the harvest or teleport me off this rock. I used that line from Star Wars.”

On Two and a Half Men

On Crack most likely

“I am on a drug. It’s called Charlie Sheen. It’s not available because if you try it once your face will melt off and your children will weep over your exploded body.

“The last time I took drugs I probably took more that anyone could survive. I was banging seven gram rocks because that’s how I roll, I have one speed, go. I have a different constitution, a different brain, a different heart. I got tiger blood man.”

On his Sexual Exploits

“What’s not to love? Especially when you see how I party, it was epic. The run I was on made Sinatra, Flynn, Jagger, Richards and all of them look like droopy-eyed armless children”

And perhaps the best quote of all….