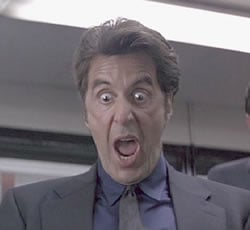 Yelling is a huge part of acting as it can be used to express anger, fear, and even make us laugh our asses.  And in that light some actors have actually enhanced their careers simply by their ability to belt out a few octaves.

Some of these people make us jump in our seats and some of them make us smile.  Whatever their yelling is used for it always leaves a big mark on us afterward.

What better a way to start a Hollywood yelling article than to include one of the best yellers of all time.  Clearly Al Pacino deserves to be on this list.  Hell I wrote a whole article on the evolution of his yelling voice.  In particular you can really get his flavor in Devil’s Advocate, Scent of a Woman, and when he says “She’s got a great ass!” in Heat.

I had to put one woman on here and clearly Susie Essman takes the cake.  Her role on Curb your Enthusiasm is 100% on her ability to yell and be obnoxious and boy does she nail it.

If there were two heads of this game, Pacino and Jackson are clearly them.  The man has had an entire career based on his ability to unnecessarily yell.  For me it all began in Pulp Fiction.  I mean yeah, he was around way before then and yelled a lot but I think it was after this movie that directors were like, “yeah, this dude can yell, let’s cast him.

“Khaaaaaaaaaaaaaaaannnnnnnnn!”  Come on guys.  George Costanza is a legendary yeller.

Personally my favorite Will Ferrell yelling moments came in Zoolander.  “What am I on crazy pills?”  But Ferrell is clearly at his best when he’s screaming for no reason whatsoever.  And let’s face it, he does it a lot and it definitely is to our benefit.

Adam Sandler (in his Prime)

Sandler’s got some pipes guys.  And no more apparent than in two of his best movies Billy Madision and Happy Gilmore.  My personal favorites are his gibberish talk at the dinner table and his expletive curses on the golfcourse.  But Sandler has yelled quite a bit in his career and I’ve loved every minute of it.

You either like his yelling voice or you don’t.  If you like it then you’ll love Chris Rock.  If you don’t then you simply will never like him.  I happen to love when he yells.

From his days on Seinfeld to King of Queens, Stiller’s a big time screamer.  “You want a piece me?”

*Bonus: Gilbert Godfried and Bobcat Goldthwait, sure.  But are they really actors anymore?  Eh, not really.