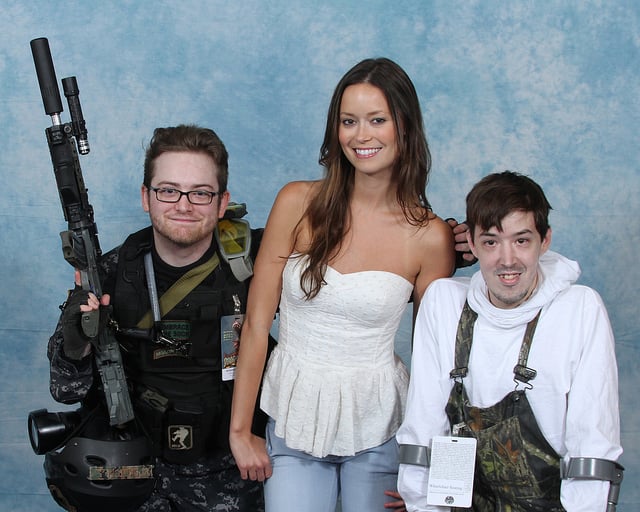 There are many stereotypes about nerds, most of them having to do with their outward appearance. They can’t dress, they’re not particularly attractive, and they’re highly socially awkward. I don’t think that’s true in general. I think that most people who are say, fans of the excellent show Firefly, are probably pretty normal. However, those who are devoted to sci-fi and fantasy enough to actually go to DragonCon? They fall into those unfortunate stereotypes to a BIG degree.

This awesome picture above is only the tip of the iceberg. At DragonCon this year, River (Summer Glau), Simon (Sean Maher), Kaylee (Jewel Staite) and Inara (Monica Baccarin) were all on hand to take pictures with fans, and there’s an entire GALLERY of these pretty people posing with their…less pretty fans. Most times, it’s quite the contrast, and creates some supremely awkward photos. Hey, I’m not judging, I know I’d have a stupid smile on my face if I met any of these people as well.

But this gallery is a must see. usually I’d take the pictures and post them below on the site, but there are HUNDREDS, and you really should just go to this Flickr page as almost all of them are worthwhile.

As I occasionally express here at Unreality, I’m no stranger to the zombie genre. Been a fan for years, actually. You want to debate Brooks canon vs. Romero canon over a casual brunch? Count me…

httpv://www.youtube.com/watch?v=VKvvkrMWcno Yeah, yeah, before I hear any crap about this, I acknowledge I don’t normally do pure celebrity stuff on the site. But I love Ellen, and I love Emma Stone, and they came together…

I’m currently taking on the monumental task of trying to watch ten seasons of Smallville in my spare time. Why? Well, I followed the show for about five years, but gave up as watching it…